Join us for our annual fundraiser March 22nd. 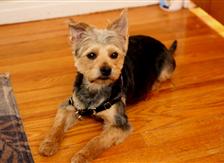 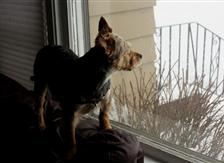 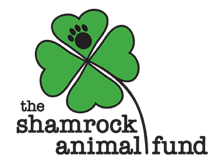 zacky the yorkie, miracle of sight

(Ithaca, New York) On a frigid early January Ithaca morning the owners of a five year old Yorkie named Zacky bring their beloved pet through the doors of Cornell University’s Companion Animal Hospital.  Richard Eimicke and Cathy McSherry made the 70 minute drive from Syracuse for the opportunity to restore their pet’s vision.

Emotions and concern simmer near the surface for this couple who saw their otherwise healthy dog develop diabetes a few months ago.  A short time later he started to lose vision.  They could see the cloudiness of cataracts developing in his eyes. “He’ll come up and lick your face. He wants to be petted. I just love him so much,” said Cathy.  As Zacky’s vision declined they realized immediate veterinary care was needed.

They brought him to Cornell’s Veterinary College for an emergency visit.  That’s where they learned he was going blind at such a young age. The dog that was filled with energy and vigor was now bumping into things at home and could no longer go for the familiar long walks.  His resolve has impressed his family.  “Any problems you got are small,” said Richard choking back the emotion. “He’s a fighter. He hasn’t let this get him down.”   Cornell’s veterinary team has a solution to the developing blindness: cataract surgery.

The problem for Eimicke and McSherry was the cost.  The estimate is $3300 for pre-operative testing, surgery and post-operative care.  They did not know how they could afford such a bill. Richard works in human services and Cathy is disabled with rheumatoid arthritis.

Jamie also explained to Richard how Cornell’s Veterinary College provides patient assistance grants in the form of discounted service for pet owners who demonstrate financial need in a manner similar to the procedure for Shamrock. “We just get by on finances and I’m always like how are we going to pay for this?” said Richard. “Even coming to Cornell at first we didn’t want to come because I thought it was more expensive.”  However, after contacting the Shamrock Animal Fund the arrangements started to come together.

Zacky’s owners qualified for the one time Cornell patient assistance grant. They received some financial help from family and utilized some of their own savings.  Plus, they qualified for financial assistance from the Shamrock Animal Fund.  “Cornell has partnered with you with Shamrock forever I guess. So their partnership, giving of time and money, reducing that fee helps so much,” said Eimicke. As a tear welled up in his eye he finished. “We put up what we could. It’s actually a true partnership of time and money.  And people just caring about animals.”

Several weeks after asking the Shamrock Animal Fund for help, Zacky was at Cornell being prepared for a vision saving operation.  His vision had worsened. Life at home had become more difficult.  “He can’t find his food. He knows it’s there somewhere. He can smell it.  But, he’ll just wander around, then he’ll find it,” said Cathy McSherry.    “Right now he has what we call mature cataracts or complete cataracts which completely obstruct useful vision,” said Veterinary Ophthalmologist Dr. Eric Ledbetter. “He probably sees light and dark, potentially large shapes moving, but that’s about it. Functionally blind.”   Yet there is reason for optimism for Zacky’s owners.  Dr. Ledbetter shared his typical experience, “If cataract surgery goes well, vision should be restored to what it was before cataracts, so near normal vision.”

A large, uniquely crafted microscope suspends from the ceiling of the high tech eye surgery suite at Cornell University.  The veterinary ophthalmologist views the widely magnified diseased eye of his patient staring into binoculars.  A few feet below he utilizes a deft touch to guide instruments that accomplish the miraculous task of restoring sight to a dog whose world had turned dark. Dr. Eric Ledbetter places a fine incision in the eye to allow ultrasound instruments to gently jiggle and then detach the cloudy cataract tissue before sucking it out through the same incision.  He then squeezes a soft, rather fluid artificial intraocular lens into the space formerly occupied by the old lens. “We inject the artificial lens and the capsule holds it in place. The artificial lens restores their vision to what it was before,” said Ledbetter.

Nearly immediately vision is restored as light again makes its way to the retina in the back of the eye. The veterinary ophthalmology team at Cornell University’s College of Veterinary Medicine repeats this same surgery over and over every week handling each of the challenges individual patients present.  The standard success rate for restoring sight is 90 to 95%.   The quality of the surgical procedure is a major component of long term success, but the after care provided by the pet’s owners is also critical to the recovery.  In the case of Zacky the Yorkie he will be on eye drops for life.  By the time he is six months out from his operation he will need only one drop per eye per day.

Richard and Cathy waited by the phone at home knowing Zacky’s surgery was underway.  By day’s end they received word.  Richard e-mailed the Shamrock Animal Fund: “ Cornell tells us Zacky can see! Had to recuperate today with no visitors. Do you believe in miracles? I do. Thank you. Thank you. Thank you.” By Thursday Zacky was back home in Syracuse recovering from the sophisticated surgery with his vision restored.

Over the next few weeks he began to return to his old habits of running around the house, playing with toys and standing look-out on top his familiar post on the top of the family room couch. “Shamrock provided that wonderful gift,” explained Richard. “We couldn’t have done it without it.  It made it all possible.” Cathy agreed, “Thank you Shamrock, thank you so much for helping out Zacky. I so appreciate it.”