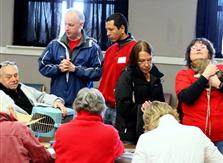 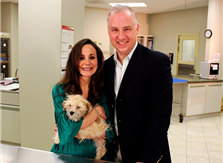 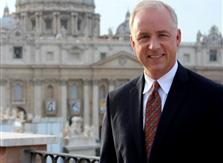 .(Syracuse, NY)  Matt Mulcahy is best known throughout Central New York as the Emmy award winning news anchor and reporter at CNYCentral's NBC 3.  That's where he anchors the evening newscasts at 5:00. 6:00, 10:00 and 11:00.   He also is the creator and author of Matt's Memo, his daily news blog on CNYCentral.com that often offers insight into the activities of the Shamrock Animal Fund.

Matt and Jamie found the inspiration for the Shamrock Animal Fund while sitting in waiting rooms of veterinary hospitals in the later years of life for their beloved poodle Shamrock.  They jumped right into creating the fund after Shamrock's passing in January of 2010.

A graduate of Liverpool High School and Ithaca College,  Matt developed some of the skills he utilizes at the Shamrock Animal Fund while getting his graduate degree at Binghamton University and completing the Entrepreneurship Boot Camp at the Whitman School of Management at Syracuse University.

Matt's first dog was a beagle named Biscuit when he was a little boy. Jamie's love for animals rubbed off on him during Shamrock's long life.

Matt is active in all aspects of the Shamrock Animal Fund from finances to marketing, fund raising to direct interaction with clients. He directs social media engagement, manages the web site and can be found shooting photos and video at veterinary appointments for clients.

As the vice-president of the Shamrock Animal Fund Matt is also an organizer of Shamrock's Celebration.  That's our annual March fundraiser that has raised nearly $200,000 during its first four years.  He also is a coordinator of the Healthy Pet Clinics which have served 1800 dogs and cats in Syracuse's neediest neighborhoods.  At the Healthy Pet Clinics he is there for set up, tear down and managing operations.

Jamie and Matt currently enjoy Bentley a bichon/poodle mix who they adopted from the Dewitt Animal Hospital after he was found on the streets of Syracuse.